Rely on us for professional consultancy at the highest standards with European projects, community development projects, startups, expanding to new markets and any project you might want to fulfill. Our expertise covers the entire program, from initial proposal and funding to legal support, project management and reporting. You dream it, we make it happen!

By using specialized resources, we are able to provide, to companies or NGOs, EU tailored support for successful projects financed or co-financed through European Social Fund, comprehensively covering all needs.

We simplify your tasks and deadlines, meeting all EU requirements, by providing complete overview, reporting, dissemination and evaluation tools:

For clients whose financial availability is limited, we have the resources to start-up and develop EU projects, putting at your disposal a system of short-term lending. The allocation of resources is approved upon the evaluation of opportunities offered by the project. For more details, please do not hesitate to contact us. 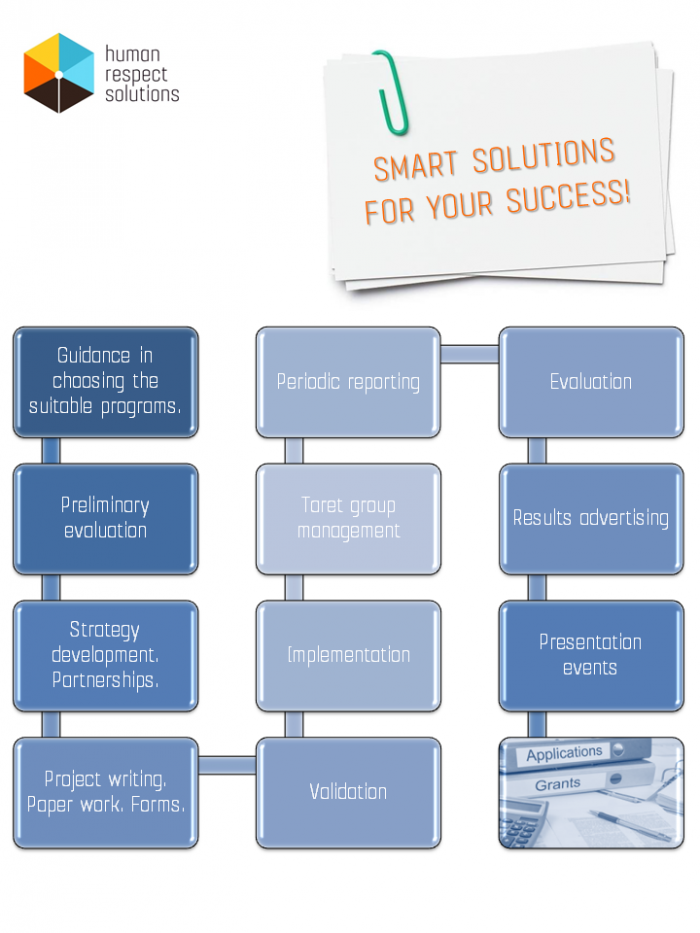 Partnership for employment in the Bucharest-Ilfov, South-West and South Muntenia Regions

General objective of the project:

Specifically, the project intends to increase the capacity for employment of 600 people from the Bucharest-Ilfov, South-West, and South Muntenia regions who are seeking a job. Additionally, it intends to attract to the labor market 114 people through mediatory activities (such as job fairs and Job Clubs). And through direct seeking, at least 90 among these will gain jobs, while 24 will initiate independent activities.

The target group will benefit from occupation services offered by public and private providers which will work in partnership, an approach that will work as a corrective measure to reduce unemployment, including long-term unemployment.

The benefits for the people who are seeking a job include strengthening personal and professional abilities (they will be better prepared to access jobs), development of the ability to identify a potential job (they will identify their own employment opportunities), they will increase competitiveness in the labor market (they will be capable of better responding to the requests of employers and coping with competition), and higher occupation (they will find a job or will launch a business).

We consider the public-private partnerships an effective way to improve society, therefore we constantly promote the economic model of social economy and by our expertise we are able to assist any company that would like to benefit of EU funds. Depending on the type of project, we can offer our consultancy support or become your full partner. Contact us and we will offer you the best solutions!

Training and Specialization for Women in the South Muntenia Region! HRS, together with their partners Association for Feminine Entrepreneurial Development (ADAF), The National Counsel for Combating Discrimination...
6 Nov 2014 Read more
Objectives The main objective of the project is to improve and develop the organization, functioning and promotion of efficient and specific structures of social economy for people with...
6 Aug 2014 Read more
This website uses cookies to improve your experience. We'll assume you're ok with this, but you can opt-out if you wish. Cookie settingsACCEPT
Privacy & Cookies Policy